Reward them - a simple app for rewarding your co-workers

It is much easier to tune in a radio than your own team.

Are there any guides on how to create a close team?

We have decided not to waste our valuable time on probing into mysteries of tomes about 1001 ways to reward and unite your employees. Especially when we knew that the one highly interesting and uncommon idea was already glimmering on our southern horizon. Inspired by our professional colleagues from Wrocław (cheers Monterail!) and their admirable rewarding system supported by bonus.ly, we went one step ahead and created our own rewarding tool.

An application called 'Reward them" is a recognition and reward system which primary role is to strengthen relationship between co-workers in order to cultivate team identity. Experience and time showed that in our case it also perfectly works as a motivational system.

As we know, creating a well knitted, close team depends on communication, on normal everyday human interactions. There are innumerable ways to express recognition to your employee. You can pat one on the back, give him high five, shout-out in front of the team, or even send him a congratulatory card if that makes someone feel good. But that's not the point.

Implementing the 'Reward Them' system went smoothly as its undeniable advantages are transparency and intuitive approach. After the 'log in' panel, you can see the main page that welcomes you with the general information about the state of the points given/received in a particular session.

We have agreed that the bonus allowance equals 50 points per month. (The currency is Polish Zloty, one point = 1 zl) Every employee is entitled to dispense 50 points to his or her co-workers, so theoretically one can gain 50 points per number of team members. This amount can be a nice allowance to the basic salary.

Let's take a look on some examples: 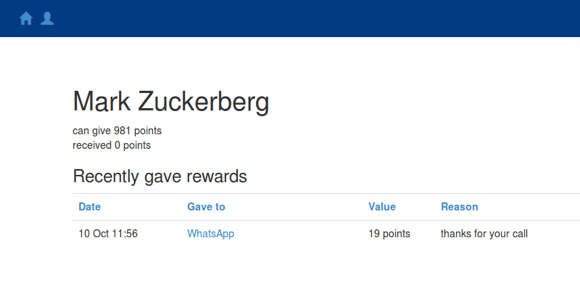 Points are given according to actions made in favor of the 'so called' team well-being. In this way, as an addition to kind, but simple, 'thanks' one has an opportunity to contribute a number of points (zlotys) that will be added to someone's salary and paid out monthly.

Finally, there's the panel that shows what has happened recently and the actual balance of points. You can also see how easy is to create a new reward. 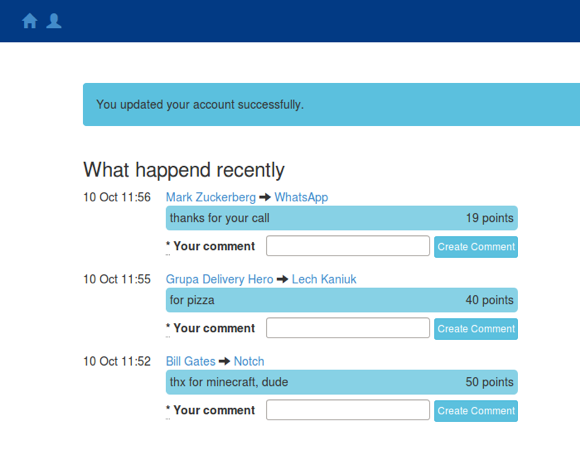 As we mentioned before, time (October is the fourth month of the 'Reward Them' existence) and experience revealed that our app works perfectly not only as a rewarding but also as a motivating program. To our delight, employees appreciate bonuses as much as they are willing to use the tool. What is more, thanks to their rewarding activity, we as the co-founders, have the unique opportunity to notice issues we didn't detect before. And to remain straight - there are no signs of nepotism and back-scratching.

Finally, let's talk about something that interests us the most: coding!

Check out how easy is to deploy our toy on Heroku (assuming that you already have an account with billing information filled): How we become truly transparent?