If you're still hesitating if RoR is the best choice for you, here are top 15 famous websites built with Ruby on Rails still rocking in 2019!

Edited in August 2019 by Cyprian Łakomy

In 2015 we had prepared a compilation that hit the bull's eye. On a roll of growing popularity we listed ten most famous websites built with Ruby on Rails. Now it’s time to revisit the list and give it a proper update.

Ruby on Rails back then and now

In a few past years a lot has changed. Considering trends, market demands, development of new technologies and other changes in the industry, this article simply deserves to be updated.

Despite the rumors that say Ruby on Rails is dead and after multiple articles have been published to enforce or dismiss this thesis, the framework born in 2004 is still alive and well.

The 2019 Stack Overflow survey lists Rails as the 11th most popular web framework among professional developers. Not impressed? Imagine still being in the game 15 years after entering the scene, having a growing GitHub community (circa 4,000 as of 2019) which means improvements on a regular basis (read more about Rails 6). Some of websites listed in 2015 switched to a different language despite Rails still scales pretty well. They changed tech stack not because there's something wrong with Ruby on Rails. Simply, as the world moves forward, some of the companies that grew with Rails are in a different place right now. As the time goes by, the next step is the one that has to be done.

Finally, some of the websites listed in 2015 still use Ruby on Rails and benefit from its mature stability. Over the years, the new ones joined the list.

Below you'll find the updated list of best websites that use Ruby on Rails. Some might say “thank you, Captain Obvious”. Chances are, though, that some of you still don’t know that world’s no. 1 project management management tool was, and still is, the first web application developed with Rails. David Heinemeier Hansson, who was in charge of the project invented this framework during the development of the product. A web service for everyone who wants to rent a holiday accommodation. Founded in 2008, it connects hosts and travellers all over the world. Our favorite. Social network platform for developers. Essential tool for every code lover. The most popular code hosting service in the world with over 31 million users and 100 million repositories as of 2019. E-commerce shop that allows users to build an online store. Necessity is the mother of invention - it was created in 2004 by Tobias Lütke, Daniel Weinand, and Scott Lake as the already existing e-commerce sites were unsatisfying. Well known to every bargain hunter. The website which main idea is to offer coupons for deals to its local or international subscribers. Launched in 2008 in US, quickly spread and gained popularity, all over the world. World’s leading online catalogue of books that managed to build a global community of readers over the years. At Goodreads, you can search and create library catalogues and reading lists. You can also follow the reviews, find interesting recommendations - simply said a seventh heaven for every bookworm. Leading crowdfunding platform supporting creative efforts. From indie bands collecting money for their records, to MVPs, Kickstarter helped thousands of projects to emerge and take off. Add-supported VOD service, a favorite site of almost every Family Guy fan. Founded in 2007, offers a wide selection of TV shows, etc. Sort of free TV on your computer. E-learning platform that allows you to upload and share presentations. Created in 2006, it took only one year to hit 3 million unique visitors. Impressive one. If you are a gamer and haven’t heard of Twitch, then you’re likely missing out on something (or still having time for other activities). Famous book with business directories and telephones stepped into the virtual world, known as the Internet Yellow Pages or IYP. Ruby on Rails based website, the biggest one that IT&T runs. 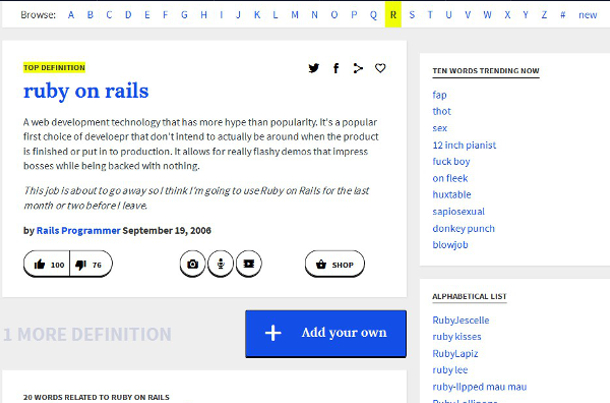 Crowdsourced online dictionary of slang, founded in 1999 and powered by Ruby on Rails. The must-visit website for contemporary human-being ever called ‘nerd’. This is the place where designers share their work, make new contacts and get praise. What’s interesting, also established software companies sign up on Dribbble to showcase their work and reach potential clients with their portfolios. From early-stage startups, to Fortune 1000 companies, Crunchbase serves as a prime source of information about firms that are pushing the envelope and the people behind them. Running on Ruby on Rails, Zendesk is customer support system that enables tracking, setting priorities and solving tasks. Most famous users include Slack, Tesco, Airbnb and Shopify. Some of which, as you might have learned also use Rails.

Impressed? So how about staying behind such tech success by yourself?

Join our series of free tutorials and learn how to make your own SaaS application in a full-stack, easy-to-approach Rails framework.